Advanced biointerfaces can be achieved due to new chemical and/or nano-structured modulated surfaces that allow manipulation of biological environment at molecular level. Surface nanostructuring of conventional and advanced biomaterials is one of the keys to promote tissue growth, repair and regeneration, through favorable interactions with both cells and surrounding biological species. Our global hypothesis is based on exciting results obtained by our team, confirming the ability of directed irradiation synthesis (DIS) to tailor the functionality of biocompatible surfaces. Therefore, the aim of this theme is to modify the structure and/or chemistry of surfaces to produce designed nano-structures and controlled chemical species with specific target on cells stimulations mediated by designed new biointerfaces.

Our team have developed a new approach that rationally integrates a magnetic protocol with bio-functionalized nanoparticles for cells stimulation, with unique advantages of bacterial nano-cellulose (BNC) as scaffold for improving cells adhesion and proliferation inside penetrating brain injury (PBI) aneurysms. This protocol serves as the initial step towards a more revolutionary approach, which would allow the neurosurgeon to design and select regions of an advanced stent to be rendered magnetic while introducing an endovascular stent in real time within the patient. A new magnetic approach that combines a metallic scaffold (Stent) with a bioactive functionalized coating to focused recruit magnetized cells. This hypothesis is probed by using a conventional NiTi stent strongly attached to a multilayer coating: a metallic surface modified by Directed Irradiation Synthesis (DIS) with a top layer (facing-up the aneurysm) of an hydrogel of bacterial nano-cellulose, functionalized with both magnetic and bioactive substances. 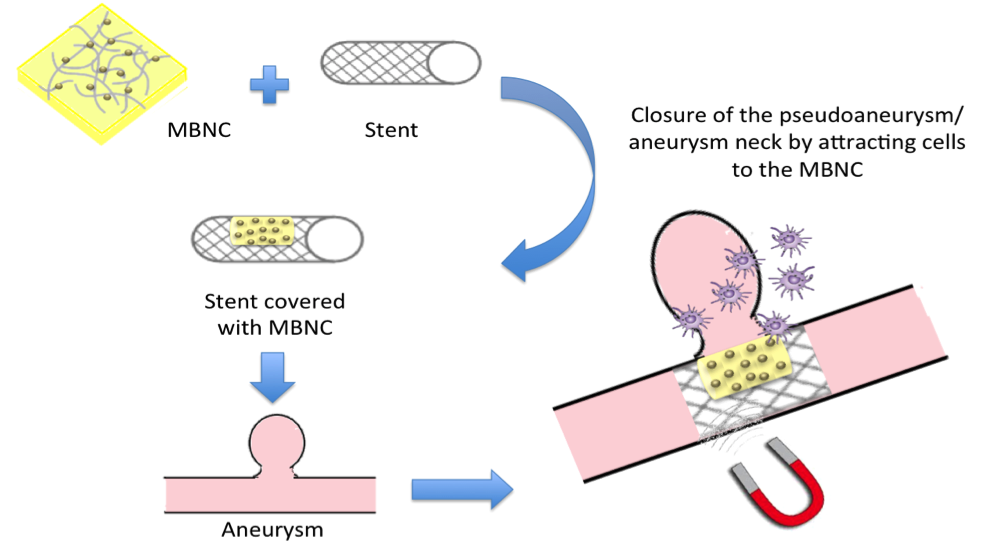 As part of the solution to same PBI aneurysms, our team have recently devised a design of nanostructured biointerfaces that induce three main functionalities: 1) rendering an asymmetric region of the stent surface magnetic, 2) induce nanotopography for cell adhesion, migration and proliferation and 3) biocompatible nanostructured biointerfaces of NiTi to neuro-endovascular stents that are locally introduced within arterial vessels in the brain against cerebral aneurysms with ultimate outcome to reconstruct the tunica media and seal the aneurysm shut.

Development of standard protocol for production of BNC with different structures, shapes and porosities, and both ferro and paramagnetic iron oxide nano-particles (IONPs) as well. 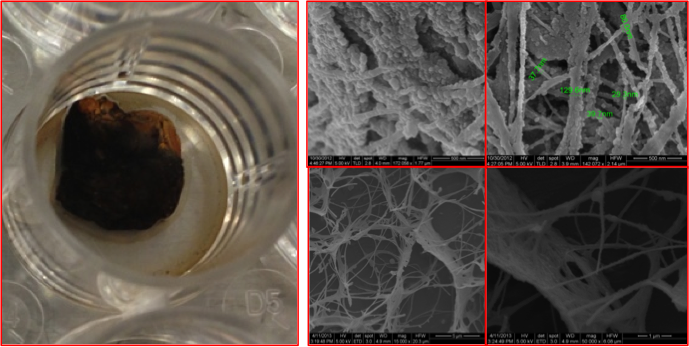 Successful fabrication of magnetic bacterial nano-cellulose (MBNC), with different nanoparticles distributions and binding capabilities; they were able to recruit both magnetic particles and cells rendered magnetic due to different magnitudes of magnetic gradients.