Advanced biointerfaces can be achieved due to new chemical and/or nano-structured modulated surfaces that allow manipulation of biological environment at molecular level. Surface nanostructuring of conventional and advanced biomaterials is one of the keys to promote tissue growth, repair and regeneration, through favorable interactions with both cells and surrounding biological species. Our global hypothesis is based on exciting results obtained by our team, confirming the ability of directed irradiation synthesis (DIS) to tailor the functionality of biocompatible surfaces. Therefore, the aim of this theme is to modify the structure and/or chemistry of surfaces to produce designed nano-structures and controlled chemical species with specific target on cells stimulations mediated by designed new biointerfaces.

The damage and failure of human joints are typically initiated by a cartilage degradation, which in most cases becomes so severe that can reach the sub-condral bone. Joints treatments are clinically addressed from a tissue substitution practice, in which the biomaterials used with that purpose are well known to be of first and second generations.

Our team has demonstrated the broad potential of DIS for cells stimulation in contact with Ti parts, after Ar+ irradiation of medical grade Ti6Al4V alloy. The most important aims of this researching line are Development of New Bone and Soft Tissues Growth Platforms. In addition to address joints replacements, our exciting results on cells stimulation after DIS treatments have encourage us to propose new advanced bio-interfaces for tissue repair on spine cord diseases and traumas.

Titanium (Ti) and some of its alloys are widely recognized to be highly successful in clinical applications of bone tissue replacement. However, there is growing tendency to attempt they application for other tissue repair and regeneration purposes like endovascular stents and nervous tissue in spine-cord damages. Despite the well-known advantages of Ti about biocompatibility and mechanical properties, it is still required an important improvements on the desired balance between biological performance (cells and tissue stimulations), mechanical strength and implants stiffness.

We developed, fabricated, and characterized a new nano-biocomposite of porous commercially pure Ti grade 4 (cpTi-G4) reinforced with carbon nano-tubes (CNT’s). Certain processing conditions were effectively able to produce a well-dispersed CNT’s with strong attachment to porous cpTi-G4 matrix, which were preferentially located at Ti grain boundaries. Interestingly, these CNT’s were associated to higher twining within neighbours grains, which was certainly consistent with higher nano-hardness values. Biological evaluation of these samples has allowed us to discard any doubt about potential cytotoxicity effect due to presence of CNTs. 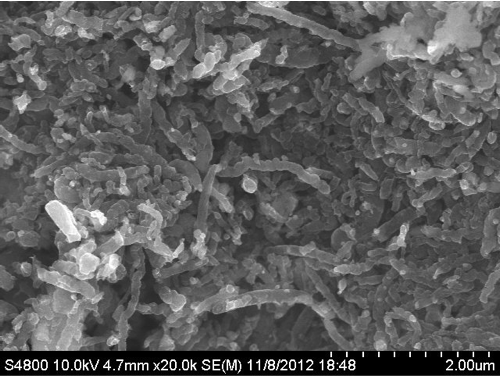 Left: a SEM image shows the high dispersion of CNT’s in Ti matrix, which ensures their positive effect on mechanical strength of the implants. Right: AFM analysis showing increased Ti twining due to CNT’s located at grain boundaries.